“The Biblical story of Job testifies to the fact that a righteous man can lose all earthly riches in one day and even more an unrighteous one. In one day the righteous Job lost all his property and also his sons and daughters. Then he lost his health and then as a pauperr he lay on the dunghill and lamented his woes. Are you not afraid that the same thing could be following you? In his misery and sickness the pious Job defended his soul against despair with strong faith in God. What will you defend yours with?”
St.Nikolai Velimirovich
~Missionary Letters #1

“An officer said to his private: “If I should be killed in the battle, don’t leave my body here, but carry it to Kraguievaz, where my wife is, and bury it there.” It happened indeed that the officer was killed. The private asked permission to transfer the body as he was told. The permission was not given. In the night he took the dead body on his back, and after a journey of three nights brought it to Kraguievaz and buried it. Therefore he was judged by the military court and sentenced to a very heavy punishment. But he showed himself very satisfied, saying: “I did what I was ordered and what I promised to do. Now you can sentence me even to death; at least I will not be ashamed in the other world meeting my commander.””
St. Nikolai Velimirovich
~ Anecdotes from ‘Serbia in Light and Darkness’

“Everything starts from good thoughts. This is what elevates a person and changes him for the better. One must reach a point of being able to see all things in purity. It is as Christ said “Judge not according to the appearance but judge righteous judgment.” And having acquired this man can reach the point of seeing everything with spiritual eyes, not physical eyes. All things can be justified in the good sense of the term. We must be careful not to accept the Devil’s evil messages so as not to pollute the Temple of the Holy Spirit thereby banishing the Grace of God and bringing spiritual darkness to our soul. When the Holy Spirit sees our heart in purity He comes and dwells in us because He loves purity – this is why He manifests Himself as a dove.”
Elder Paisios
~Spiritual Struggle

MONASTICISM AND SOCIETY…
“We must not deceive ourselves: the life of the desert-dwellers of the Northern Thebaid is far beyond us in our time of unparalleled spiritual emptiness. In any epoch the monastic life is limited by the kind of life which is being led in the world. At a time when daily Orthodox life in Russia was both extremely difficult and very sober, monasticism could flourish; but in our time when ordinary life has become abnormally comfortable and the world-view of even the best religious and intellectual leaders is shockingly frivolous, what more is to be expected than that luke-warm spirituality with comfort with which bold voices from inside Soviet Russia* even now are reproaching the free West?”
Fr. Seraphim Rose
~ Correspondence (in the 1970′s)*

“Man is a mystery. We carry within us an age old inheritance – all the good and precious experience of the prophets, the saints, the martyrs, the apostles and above all our Lord Jesus Christ; but we also carry within us the inheritance of the evil that exists in the world from Adam until the present. All that is within us, instincts and everything, and all demand satisfaction. If we don’t satisfy them they will take revenge at some time unless, that is, we divert them elsewhere to something higher, to God. That is why we must die to our ancestral humanity and enrobe ourselves in the new humanity!”
Elder Porphyrios
~Wounded by Love 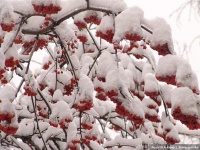 “It will remain as the greatest wonder in history how a poor Man, who preached in Palestine for about two years, who scarcely had a hundred followers at the end of His mission, who was crucified and died a shameful death, whose cause seemed a quite desperate episode, scornfully rejected or fearfully abandoned by all those who knew it–how this poor Man replaced successively the mightiest gods the human imagination ever invented: Zeus in Olympus, Jupiter in the Capitol, Wothan in the North, and at last also Perun in Kieff. The secret lies, I think, in the reality of His human life, in the mystery of His resurrection, and in the amazing enthusiasm with which thousands of His followers afterwards suffered death for Him and His cause.”
St. Nikolai Velimorovich
~Agony of the Slavs

“A novice who was continually disturbed by confusing thoughts and even doubts was sitting one night on the church pew saying the prayer out loud. ‘For a moment I felt that my heart inside warmed like a heater. It was sweetened so much that my mind became united with my heart. I can’t describe what I felt inside me. The only thing that I can say is that for a little while I felt heaven in my heart. That lasted for two or three minutes. As soon as I returned to my natural state I turned my gaze to the side. What did I see? The Elder in the next pew with the 300 prayer rope in his hand’.”
Elder Haralambos
~Abbot Haralombos

“Suddenly I also saw the late father George in front of me. He was a contemporary Saint…He had put in his mind if possible to take out all the sinners from hell. Every day he liturgized and commemorated thousands of names. And he would go to the tombs and all day read trisagion prayers and memorial services for the departed. Now I saw him in a vision and heard him saying to me with great amazement, well, well; until today I thought that the dead were only saved with liturgies and memorial services. But today I saw and realize the damned are also saved with prayer ropes.”…That vision informed me that my cousin had been saved. But God also showed me the power of the prayer rope – that it can even take souls from hell.”
Elder Joseph the Hesychast
~Abbot Haralombos

“I myself felt such a peace of conscience that I begged God to let me leave this life while I still was a disciple under obedience because I felt that my salvation was guaranteed. One day when I was in this state I asked: “Geronda [Elder Joseph] why don’t I feel any fear when I meditate on my sins, on the departure of my soul and on passing the toll houses? I put myself on the left of the Judge but I can’t. Instead I naturally and effortlessly see myself going to the right. Is this a delusion?” “Since you as a disciple have left the entire burden of your sins on my shoulders you have been relieved. From what the will you be accountable when you have entrusted everything to me by confessing everything and I have assumed the responsibility leaving you free? How could you not see yourself on the right? But will hinder you? If you did your own will the burden would be on you and you would not feel like this.”
Elder Joseph of Vatopedi (the author) speaking
~ My Elder Joseph the Hesychast