“Usually Geronda would not tell us about his own spiritual state. For example if he had just seen a vision he wouldn’t mention it. Only later when we were overwhelmed by some difficulty and needed consolation would he bring it up and say: “Don’t despair; we have a great God Who watches over us and it is through afflictions that we approach Him. It was after the Cross that God arose and ascended into heaven in the flesh. After afflictions follow consolation, visions and revelations, to the suffering soul. They don’t come during times of happiness but when the soul is being strangled by bitter afflictions and attacks of infernal darkness.” And he would tell us one or two visions to illustrate his point and fortify us.”
Elder Joseph
~My Elder Joseph 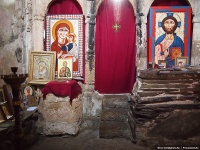