“… Geronda found out that his cousin had a bad death. When she reached her end God made an example of her to show her relatives that her behavior had not been good…From that day on, Geronda begin to fast and pray constantly for his cousin. For a long time he kept seeing that she was in the darkness of hell. One day he was praying in his hut for her he saw her ascending out of hell into heaven full of joy and holding a key in her hand…This reveals that through Elder Joseph’s many prayers and fasting Catherine was freed from the bonds of hell! Indeed, “the effectual fervent prayer of a righteous man avails much.””
Elder Joseph
~My Elder Joseph 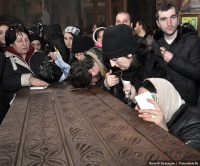